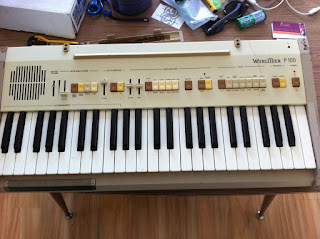 The other day I bought one of these keyboards off of ebay in a "for parts or repair/not working" state. I paid $90 which may have been a ripoff but there isn't too much info out there on these particular units so it was hard to know.
I listened to a few demos on youtube and it delivered the shrill, top-end, dinky vibe I was looking for so I bought it with the mind to fix it.

I do this often if the problem sounds fixable, e.g. Not powering up. This is usually an easy fix - I have had people call me a masochist.

The seller said that they could not get the unit to turn on. When I received, the first thing I did was open it up to look for an failed Electrolytic Cap on the power board. 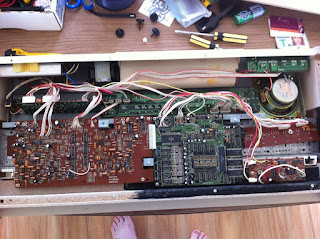 Nothing looked bad but I reflowed some of the main solder joints to and from the transformer and across the fuse (which was also fine) and put everything back together.

I found a 12V adapter I had laying around, check the polarity of the plug and it matched so I plugged into the 'Car battery' power input and turned it on.

Immediately noticeable was a power hum and the fact that multiple keys were not working, which is common to old organs and keyboards; sometimes its a failed diode on the key matrix and sometimes (if it's consistent e.g. all of the G's or all of the C's) it's most likely a problem with a PIC chip.

I took note of the non-working keys and in the meantime searched around for another power supply to see if the hum was due to my external power not due to something internal.

I found a different power supply and the hum disappeared, I also found a cable to plug directly into the proper AC power inlet on the keyboard and that also worked fine. I'm not sure what the buyer meant by "It doesn't power up" but it definitely does and so happy days.

I tracked down which diodes corresponded to which keys on the panel board inside the keyboard and put a red mark above them. I'll get some substitute 1N4148 diodes for them tomorrow and switch them out.

Other than the key problem the keyboard works fine.
It was initially hard to track down info on this keyboard as I was searching for Wurlitzer P100. But noting the back of the keyboard: 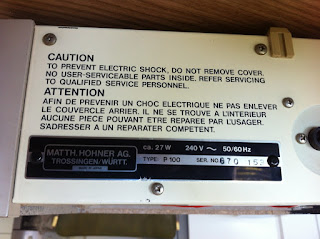 I tried searching for Hohner P100 and more results came up including the manuals and schematics which allowed me to track down what diode was used on the panel board and search for substitutes.

I'll switch out the diodes and update after that. Here are some more pictures of the keyboard. 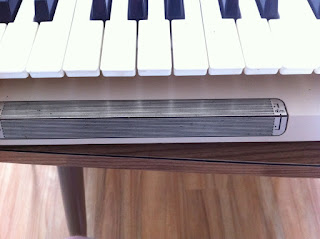 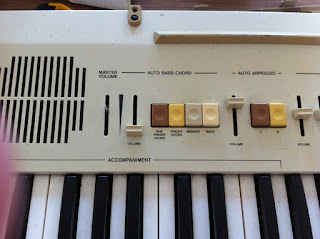 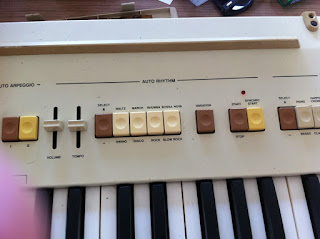 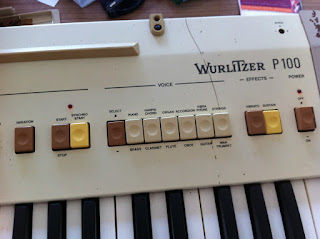 UPDATE: I found my multimeter and checked the diodes before I swapped them out and found they were functioning fine, so I took some Switch Lubricant to the contacts of the keyboard PCB and when I reassembled found that all the keys worked fine.
Fully functioning Wurlitzer/Hohner P100 with just a little spring cleaning. Prime.
Posted by Audio Travels at 00:25